Janet has two books available to purchase from the Amazon Online Book Store: 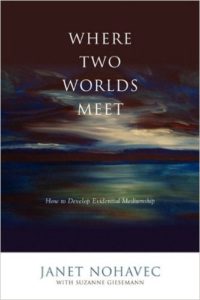 Janet Nohavec has built her reputation as a medium and as a teacher of mediumship on the respect and integrity she gives to her work. In Where Two Worlds Meet, Janet shows you how to hone your own mediumistic gifts by sharing her proven, systematic techniques for practicing evidential mediumship-the most credible way to build a bridge between this world and the next. For Janet, mediumship is sacred work that carries tremendous responsibility. In these pages she gives specific instruction in how to change people’s lives and bring comfort to those who are grieving with evidential messages from the other side. Here you’ll learn how to paint those who have crossed over back to life, and after reading Where Two Worlds Meet, you won’t settle for anything less than a masterpiece in your mediumship. 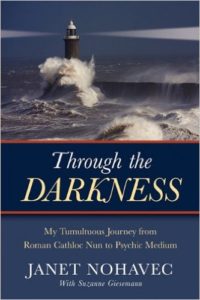 Through the Darkness is the compelling true story of evidential medium Janet Nohavec. Janet first saw “the spirit people” at age five, but after her mother labeled Janet a demon child, she learned to suppress what would later reveal itself as a rare gift. Follow Janet as she evolves from a scared and powerless child to a rebellious teenager, and later to a confused and doubting Roman Catholic nun. No longer willing to deny her God-given gifts, she leaves the convent to become an unconventional spiritual seeker who is later identified as one of the top psychic-mediums in the country. Janet’s story is as much about her amazing evidential mediumship as it is about her ongoing struggle to find peace and to discover her own personal power. Dramatic evidence from the other side combines with real-life drama as Janet faces obstructionism and intolerance unheard of in this country in recent years.

Denounce with righteous indignation and dislike men who are beguiled and demoralized by the charms pleasure moment so blinded desire that they cannot foresee the pain and trouble.

No products in the cart.